Getting Back to Normal

Happy Monday!
Summer is in full swing, but with school starting on August 14th, it feels more like it is winding down. I guess it's a bit of both, since we typically have really nice weather well into late November. School starting just means we get back into a rhythm while still enjoying long days and warm nights.
Mason did his last cooking demo at the state fair and he did it with his usual style and flair. It was an especially memorable demo because he had lots of love in the audience. Julie Ballard, Lisa Leis, Dave, and several of his instructors and fellow students from Napoli Culinary Academy. Yes! Mason did a cooking demo with his teachers in the audience! If that's not some pressure for a 9 year old, I don't know what is. Mason pulled it off like a rock star and a few days later had this to say, "You know mom, Julie was like, Smile! Smile Mason! and taking my picture. I smiled, but I wanted to say to her, 'You know, this is what I do, it's no big deal, I do it all the time. It's just what I like to do.'" Now we are done with cooking demos until September when he will be cooking at the TomatoFest here in Auburn. For August, Mason is going to teach everyone how to make homemade Smoshpellows on GoodDay Sacramento (August 8th in the 9 AM hour).
Dave is off to Arkansas for training and Mason and I are getting back to business as usual - culinary school (him), real estate (me), and planning his two big fundraisers for his school kitchen remodel (us). Have a super duper week and remember, the way to make your dreams come true is one little action at a time!
Posted by Kathy at 5:00:00 AM No comments: 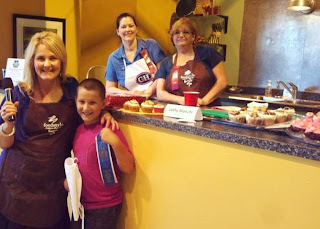 Happy Monday!
It's been a busy week here at the Partak household, Mason and I have been competing at the State Fair and Mason has one cooking demo done, and one more scheduled for Tuesday night. In addition to three contests (Mason has one award of merit and one blue ribbon/$50, and I have a third place/$150 and one more contest on Thursday), we worked the Placer Grown booth on two different days. Add to the State Fair fun, Mason started football, practicing every night from 6-8 and still in culinary school. Oh, and yeah, I'm working at the real estate office. It's been a busy summer!
In other news, Mason has been asked to be a regular on an Internet television show call The Great American Amateur Kitchen. This is a program that takes YouTubers and gives them a larger platform to be seen and heard. They love Mason's energy and fun personality. Mason has a new giveaway on his website, and as usual, a fun video! You can see him at www.masonpartak.com - all you have to do is leave a comment on the video to be entered to win. You can also follow all of Mason's antics on Facebook at Mason Made.
Now it's time to head into a new week with work, culinary school, football practice, another cooking demo and one more chocolate contest at the State Fair. I think I'm tired. Laughing! Not really, busy is better than bored and no matter how crazy our schedules get, we make time to get to the river and cool off. I hope you are enjoying your summer as much as we are!
Posted by Kathy at 5:00:00 AM No comments:

This is a Big Week!

The California State Fair started on Friday and Mason is making two dishes for competition (a cookie and a cupcake) and he is doing a cooking demo all in the same day - Tuesday at 11 AM. We have been practicing and preparing the contest entries and are hoping for winning entries. For now, that's all I have as we are up to our eyeballs in state fair activities. I'll have an update on next Monday! Happy Summer!

Welcome to a week of summer temps that are not in the triple digits! It's been hot here, but we have been too busy enjoying the 4th of July holiday to be deterred by hot summer days! Mason had a cooking demo on the 4th in Calistoga for the Napa County Fair. Though the fair was not a big one, Mason had a full house for his cooking demo - 50 people watched him do his "Food on a Stick" themed demo. He made chicken skewers seasoned with Spike (with a mandarin mustard dipping sauce), salad on a stick (with a homemade ranch dressing), brownie berry bites (with a marshmallow cream dipping sauce), and his 4th of July Sparkler drink. Whew! It was an ambitious demo with so much to do, but he did it like a pro! The coolest part of this demo? Dave joined us and helped make it all go smoothly. We cook as a family at home and now we got to do it together on stage, too. You can see a highlight reel if you want by clicking here. We had a ton of fun in Napa! We did lots of swimming, watched the July 4th parade, of course we saw fireworks, and we visited Castello di Amarosa, a winery that is an incredible castle! We plan to go back and do the whole tour and more wine tasting. We took a day trip to Healdsburg, Windsor, and Santa Rosa before heading back to the hotel to swim some more. It was a great 3 days. We arrived home on Saturday, got settled in, laundry done, picked up some groceries and then had a whole day at home to relax before having to go back to work and school.
Now it's time to gear up for the California State Fair! Mason and I both have entries in the baking contests and as you know, Mason is doing two cooking demos at the fair. He will be cooking both kids days, Tuesday the 16th (11 AM) and 23rd (7 PM). Did you know that California has deemed the artichoke the California State Vegetable? Yes! With that in mind, Mason will be making a delicious artichoke pesto pizza with grilled chicken and bacon. We've worked on this recipe and it's good! I add fresh tomatoes and basil to mine, but either way, it's super yummy. He will also do his brownie berry bites and his July 4th Sparkler. It would be fun to see you if you can come to the fair and see Mason do his thing.
Time to hit my list of things to do and prep for our first contest on Saturday. I hope you all had a lovely holiday weekend and are looking at a great week, too!
Posted by Kathy at 5:00:00 AM No comments:

Happy 4th of July week! This is going to be a busy week so let me make this brief so we can get to celebrating. Mason has an appearance on Good Day Sacramento on Tuesday and a live cooking demo in Napa on July 4th. We are taking a mini trip to Napa to get Mason where he needs to be and enjoy some time as a family. I'm sure we will sip some wonderful wine, swim, and make fantastic memories.

I will post a link to Mason's performances when I get them, but for now, I have a weeks worth of work to do in 2.5 days. I know, it's classic, if we all worked every day like we do the day before we go on vacation, just imagine where we could go! Have a wonderful 4th of July, and remember, the memories we make with our families and friends is the best gift ever!
Posted by Kathy at 5:00:00 AM No comments: