Just Let it be Over Already!

I'm not welcoming you to Monday because it's not getting off to a very good start...why would you want to be here? I don't!
In any case, Mason was suppose to appear on Fox 40 News with his culinary school and of course, everything went wrong. We were running late getting out the door, I couldn't find my car keys, when I finally did, the car was on empty so I had to stop. We've all had them, "one of those days." I try not to let this kind of stuff set the tone for my whole day, but I didn't succeed this time. We got to the culinary school to learn that Fox 40 cancelled due to breaking news. Really?! And nobody could call me? I ended up bringing Mason back to school in Auburn as it would have just been too long a day to leave him until Dave could pick him up at 5 PM. This is nothing but a rant about nonsense, but it is the nonsense that will get our goat if we don't take a deep breath and recognize that it really is nothing, nothing at all. Because I didn't just shake it off, my whole day was off-color and I was ready to just hit the reset button. I was glad that the rest of my family was ready to bid Monday farewell and we all went to bed early.
So a Manic Monday on the heels of a really fun weekend make the way this Monday went all the more disappointing. We had Mason's last football game on Saturday and then it was time for Halloween parties. Mason was invited to a sleepover and that worked out really well for Dave and I, as we were able to go out with our friends and not have to worry about someone to stay with Mr. Mason. I went with one of my classics, Ms. Cruella DeVille while Dave dressed as a Roman Gladiator. This was the first year in a long time that we didn't dress as a couple as I made the point, we have 4 large tubs of costumes, let's recycle some of them - so we did. Now we are getting ready to carve pumpkins and trick-or-treat. What about you, do you have plans for Halloween?
My week didn't get off to a very good start, but I am not going to let it color my whole week. Let's make something great happen, if not for ourselves, for someone we love! Happy Halloween!
Posted by Kathy at 5:00:00 PM No comments:

The colors are in full bloom here in the Auburn foothills and as much as I love it, it's happening so early that come November, the trees will all be bare. N matter what Mother Natures schedule is, I am loving it!
Last week we were in Southern CA celebrating Mason's 10th birthday at Disneyland. We all had such a good time riding roller coasters, swimming in the hotel pool that also had a waterslide, and taking pictures with classic Disney characters. We were able to dine at Goofy's Kitchen at the Disneyland Hotel compliments of Disney (we could not have afforded to eat there on our own dime!), and the "World of Color" show at California Adventure was well worth the 30 minute wait with about a 1000 other people - "WOW!" is all I can say. When we planned this trip months ago, we planned to stay one more night and visit Universal Studios, but as we got closer to our departure date, we pulled the plug on the last stop, boy am I glad we did that! We were totally pooped out and out of spending money. Not to mention, I don't think my feet could have done another full day of walking and standing in line. We can save that trip for another time.
We wrapped up our weekend celebrating Mason's birthday (which was on Sunday) at home and with friends. Mason got to go out with his friend Kyle on their boat, knee boarding and enjoying this lovely fall weather, while Dave and I watched football and geared up for the new week. We ate birthday cake and all went to be early. I think this birthday will go down in the Partak Family History book as, "Epic!"
Before I bid you a great week, this is the last week to vote for Mason in the Uncle Ben's Beginners in the Kitchen contest - it is really easy and you do not have to register, agree to any terms, just a one click vote. You can vote once every 24 hours AND you can vote from all of your separate devices (smartphone, iPad, iPod, laptop, desk computers, etc) for additional votes. This link will take you right to Mason's video, not on Facebook - If you have a moment, please vote... https://www.bensbeginnerscontest.com/brand/gallery?region_id=us-en&content_id=273
Posted by Kathy at 5:00:00 AM No comments:

Surprise! Mason Finally Made it to LEGOLAND! 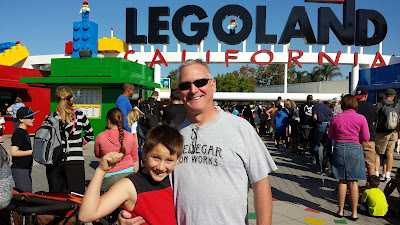 Dave and I have been wanting to take Mason to LEGOLAND for the past several years, and we almost did two years ago - except, Mason was not behaving in such a way that warranted a trip to a theme park 7 hours away. Yep, we canceled the trip! This time, we planned a day at LEGOLAND and a few days at Disneyland for his 10th birthday and didn't tell him. The idea was to get him up early on Sunday morning and just let our road trip begin. Well, it was all good until a week before we left, a confirmation came from the Disney property we were planning to stay at and the cat was out of the bag - at least the Disney cat was, we still had LEGOLAND!

We managed to keep it a surprise until we could not avoid the signs, arrows, and Lego figures everywhere! Here we are, we finally made it to the land of everything Lego! Happy 10th Birthday Mason, let the fun begin!
Posted by Kathy at 5:00:00 AM No comments: 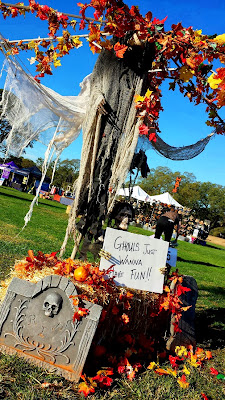 The last few weeks, me and a few other instrumental parents at Mason's school were working really hard to win the Uncle Ben's contest that consisted of $30,000 for a new kitchen at the school. Alta Vista School has a room that is called the kitchen, but there is no stove or oven to cook with. They have a counter and a sink, that's about it. The contest consisted of making videos of kids in the kitchen with a parent cooking a recipe that included Uncle Ben's rice. We did lots of those and once we were on the leader-board, we realized we were being miscategorized as a medium sized school when we are actually a small sized school. I wrote to the powers-that-be and got it corrected and we sat in first place until the final day. With just hours left in the contest, the leader in the medium sized school apparently was miscategorized, too, and they then moved over to our small category and took first place. We were not resting on our laurels, we were still filming, editing and entering all the kids we could get, but they moved over with 50 entries to our 32 - with just 6 hours and only me filming and editing and uploading to the contest site, we just couldn't catch up. Now that it's official we will not be the recipients of this much needed money, we are back to fund-raising the old fashioned way. That's not all bad and the Uncle Ben's contest is still running for the individual entrants - if Mason is a finalist, he will win $10,000 for his school and a bit of cash for himself, too. There is a voting component but I am not sure what the terms of the vote will be. I know people can vote once every 24 hours, but what I don't know is if we can vote without giving up all of our privacy via Facebook to make that vote happen. The good news is, the public vote component is only 20% of the criteria to win. Who knows?! In any case, Mason and I are moving forward with the other fundraisers we had already planned. Stay tuned for the details, there just might be something worthwhile in it for you! 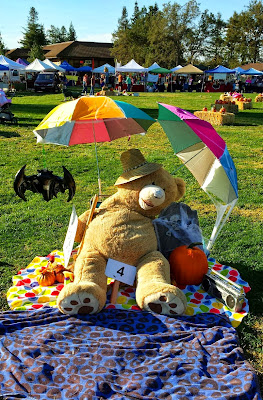 On a brighter and more fun note, Mason and I entered a scarecrow contest on Sunday morning and my entry took 2nd place ($100) and Mason was the only kid to enter, but he did not build a traditional scarecrow so they gave him the 3rd place prize of $50 for showing up and participating. You can see pictures of our entries at www.mondaymotivator.blogspot.com. Oddly enough, I didn't build a traditional scarecrow either but I still won 2nd place. I think he should have won first place, but that's just my two-cents - and he ended up with $50 he didn't have before!
Now Mason is at culinary school and I am working from a Starbucks down the road. I would much rather be napping. Instead, I'm looking for awesome ideas to raise the money we need for the Alta Vista kitchen. I want to do things that the kids can participate in, too. If you have suggestions, please send them my way! Now I'm ready to call the Monday done, yeah, I know, it's still early, but I'm ready for a new day. Have a great week!
Posted by Kathy at 5:00:00 AM No comments: