It's Monday again, I don't mind because I get to see Julie and her dad Gordon for lunch at Mason's culinary school. The other bonus today is that due to Mason hurting his foot on Friday, he does not have football practice tonight - sort of call it a reprieve. Mason
As a communication major and someone who has spent her life working on communicating more clearly and authentically, I am struggling with the landmines of the new communication tools so many of us use on a daily basis. I've had two really bad experiences with Facebook in particular and the barriers it places on our ability to communicate with one another (in their forum). It is not necessary to go into details but what I would ask of you, my friends and family, please call me with important news. I learned that relying on Facebook to get a very important message to a dear friend was a huge mistake. She was hurt and that in turn hurt me because I thought I let her know I was there for her. Facebook is fine for frivolous news, our day to day goings on, and nonessential information, but not life changing news.
With that said, maybe we can all make some time to chat on the phone, meet for coffee, plan a girls or guys weekend, or even write a thoughtful note and drop it in the mail - something you touched, touching someone you love. Maybe we need to make our personal worlds a little smaller so we have time to nurture and foster the relationships that mean the most to us. It gets complicated with school, jobs, kids, clubs, community, and all the other things we have going on. I'm thinking a smaller sphere would be good, though it's not easy to disconnect it may not be necessary altogether. I like Facebook for the "social-ability" of it, and the acquaintances I've come to know better but when it starts to create hurt feelings, stress, and anxiety, it's just not worth it. Just some food for thought and the idea that we can really make our lives more enjoyable.
Posted by Kathy at 5:00:00 AM No comments:

Happy Manic Monday! I know some of you have busy schedules every day so my craziness is not really crazy at all. Only 4 more Mondays of football practice, so when that is over, it won't be so hectic.
Mason and I are gearing up for his last few cooking demos of the year, and with those come a couple of contests - a salsa contest at the TomatoFest at the end of this month, the Harvest Festival in October, and of course, we have titles to maintain at the Mandarin Festival in November. Stay tuned, this is going to be super fun!
Football was brutal this weekend, Mason's Jr. Hillmen got their rear-ends handed to them, and then San Francisco did, too! What the heck? Not too much else to share today, but here's a question, what do you think would be a good theme for our annual family Christmas card? Last year we did the football pile up and it was really well received. There has been the suggestion that we do a kitchen/cooking themed card, and that's a possibility, but what do you think?
Off and running! Have a great week.
Posted by Kathy at 5:00:00 AM No comments:

Y'all Ready For This? 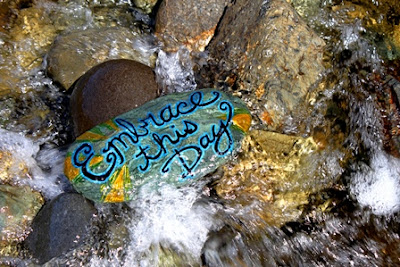 It's Monday, are you ready for the new week? I'm not sure I am. Monday's are our busiest day of the week. Dave is out the door first at 7 AM and right behind him Mason and I are out the door to school and work. I drop Mason off at 8 and then I get a few hours of work done (sometimes real estate related and other times, household stuff that didn't happen over the weekend - work nonetheless!) before I pick Mason up at school at 11:15 to take him to culinary school in Sacramento. I stay in Sacramento from noon to 4 PM while he is in school, I typically set up shop in Starbucks and take care of work e-mails and the like. From culinary school, we get home by 5 PM where Mason has to get out of his chef coat and into his practice uniform and pads to get to football practice by 5:45 where he will be until 8 PM. The good news is, we only have this jam-packed schedule on Mondays and it will only go for 6 more weeks.
Something noteworthy, Mason is doing a live cooking demo at the TomatoFest on Sunday, September 29th and this demo will mark his one year anniversary of doing live cooking demos! Can you believe it's been a year, more than a dozen live cooking demos, more television appearances, a trip to NYC to appear on the Lisa Oz Show, also a trip to CT to appear on Connecticut Style and Mason has even become a regular on GoodDay Sacramento working with Tina, Julissa, Mark S. Allen, and Cody "The Bow Tie Guy" Stark. I told Mason when he started booking work that he could quit anytime he wanted but he would have to fulfill his commitments. We are coming up on his last few demos of this year so I asked him if wanted to book for next year. He didn't answer with a quick yes so I queried a little deeper. It turns out, he loves doing the cooking demos and television appearances but he is apprehensive making his videos. WHAT the heck? I asked him if he has watched his videos, apparently, he does not see the "It" factor in himself on camera that we all see. In any case, we did our morning visualization and we went through some of his fears and visualized those melting away while confidence and success showed up in their place. Stay tuned, but for today, Mason wants to continue his culinary journey for another year.
Other fun news from the weekend, Dave, Mason and I all entered the brownie contest at our local fair this weekend and I was alone in my quest for the blue ribbon in the cupcake contest on Sunday. Dave took the blue ribbon for his "Better Peanut Butter" brownie and my "Campfire S'mores" brownie took second. Apparently, second place was where I stuck as that's what I won in the cupcake contest with my "Delicious Flavors of Fall" cupcake. To offset all these goodies, our family is doing "15 Days of Salads" for dinner. We completed day 5 last night with a classic grilled chicken Caesar salad with Dave's homemade dressing - it was SO good! If we are friends on Facebook you can see each salad as I am posting them each night.
I hope you are making the most of your days and really participating in the process - whatever process it is, make some part of it fun. Happy Monday, embrace this day!
Posted by Kathy at 5:00:00 AM No comments: 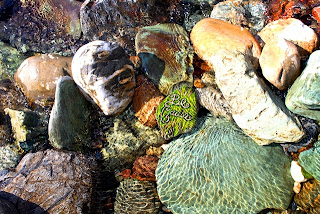 This long holiday weekend has been complete bliss! I got 3 days at the river where I painted several new rocks and posted some new RiverLights Originals images. I attached one that I am particularly fond of, what do you think? In addition to my time at the river, I enjoyed a much needed visit with friends from high school. Julie and Lauren and I have stayed in touch through the years but with Facebook making our worlds so much bigger, I've reconnected with several friends and it has been fun to catch up and be connected again. Add to that a chat on the phone with Lisa A. and you get the idea how really rich I am in friends!

Another something from this weekend is that I entered my burger recipe for the Sutter Home Build a Better Burger recipe contest. This is one of those high cash prize contests , $100,000, so I am sure they get hundreds, if not thousands of entries. I'm not sure I worked hard enough to come up with something that might qualify, but I had nothing to lose in entering. The hardest part was writing out the recipe correctly and completely. Seriously, I read it, re-read it, and read it 10 more times to make sure everything matched up. I made the mistake of not noting when to add a specific ingredient on one of Mason's recipes for the State Fair and he was disqualified when it was pretty clear he would he took the blue ribbon. I will not let that happen again, and I bet he won't either! My burger is called, "Why Eve Ate the Apple! Burger." It is a beautifully seasoned burger with bacon, a tablespoon of bacon fat and bourbon cooked in the patty topped with an apple-red onion slaw on a toasted French roll with a spread of apple aioli. The biblical reference to Eve and the apple indirectly ties into the sins of bacon, bacon fat, and bourbon. Even if my burger doesn't qualify or win, my name is incredibly thoughtful and creative. I won't know anything until December, but rest assured, if I get picked as a finalist I will send out a big Whoo-Hoo e-mail!

I got my act together for the coming week with laundry, dishes, some meal planning for the coming week, and I made summer galettes in both sweet and savory. I am doing a cooking demo at the TomatoFest at the end of the month on Friday and Mason's demo will be on Sunday. I am making a tomato galette with my secret being adding a bit of fresh black pepper to my crust. They are a super easy meal that is just different enough that you feel like it's a special occasion. If you are a tomato lover, you will love this recipe.


Dave and Mason are on their way home from the game convention today and Spencer and I woke up to pounding thunder and lots of rain. The rain today is just a cherry on my weekend cake, well, maybe not cake, how about raw sugar sprinkled on a peach galette! I hope you had a lovely holiday weekend and are looking forward to a productive week. Happy Labor Day!
Posted by Kathy at 5:00:00 AM No comments: