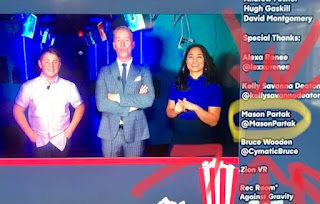 Okay, this is a total “Proud Mom” moment and it’s going to embarrass Mason so I won’t tag him. HE’S IN THE CREDITS!!! I love seeing my boy’s name on the screen, I think my mascara is running. Thank you Mark for giving Mason this opportunity, sincerely, thank you. 🙏🏻❤️🙏🏻     It was fun watching Mason do his TV-thing for an episode of Extra Butter earlier this week with Mark S. Allen, Alexa Renee, Kelly Savanna Deaton, and Bruce the VR Evangelist. What an awesome day it was. They were talking all things Ready Player One coming out later this week.

And since we are talking about Mason and show business, one year ago this week, he was spending his very first day on a movie set filming his first movie. #APParition I know editing is darn near done, and I can’t wait to hear when it’ll be out.

Friends, Mason needs to grow his following on YouTube to 1000+ followers so he can access some of their marketing features. Will you help and subscribe? Maybe share on your pages as well? We do not overload with uploads, but you will likely get an email when he does upload something new. Your support would be so greatly appreciated! Mason has been having some fun with The Social Media Chef where he reviews the recipes you see on your social media feeds, he makes them and lets you know if they work like they show they do and if they taste good. If you want to check out one of his more recent videos, this one was fun - Here it is, #LuckyCharmsPie #MasonMade #TheSocialMediaChef

Mason Made Me Cry Today 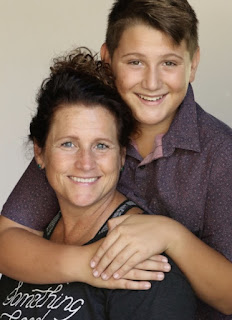 This morning my 14-year-old made me cry on the way to school. Y’all know Mason and I talk a lot, probably way more than most 14-year-old boys talk with their mothers. We talk about drugs, girls, dating, sex, and video games. Mason and I have been talking about video games and my dislike of any violent video games since he’s been a very little boy. Having a father who is in the military makes it difficult for me to forbid guns from being in the house, but we talk about the danger of them all the time.

After the Florida shooting, I walked into Mason's room and he was playing a video game where he was creating his virtual weapon. It was an AR, and he was mixing and matching handles, and what looked like different parts and pieces to customize it. It made my heart sink. I made a snippy comment to him that was something along the lines of, "I bet the kids in Florida who watched their friends die would be aghast watching you do this." He gave me the teenage-robot reply, it’s just a game mom. That was a few weeks ago and this morning we were on our way to school and he was telling me about a dream he had last night and the dream, like most, made no sense except it ended with him killing a bad guy with a gun. He assured me it was all good because the guy he killed was a "bad guy." I asked him who assigned him the decision maker of who is good and who is bad? Even if someone is bad, is it his right to kill them? He then gave me that same reply, it was just a dream mom. I noted that the things in our subconscious often come up in our dreams, and the video games he plays are absolutely fed into and recorded in his conscious and subconscious minds. I then made the analogy that kids who are bullied at school, year after year, if they have access to these kinds of games where they can customize their virtual weapons, do those kids not think that what they’re doing is okay because they’re killing a bad guy when they get a real gun and actually kill people? Mason noted that a bully isn’t necessarily the same as somebody who is breaking into someone's home, or kidnapping a child to which I countered, "If this child has been picked on and tormented year after year to the point that they don’t want to go to school, why is that bully not as bad as the everyday criminal? I would argue a bully is worse." My point was to shine a light on compassion and empathy, I said to Mason that a teenager who is stable looks at those games and says, mom, it’s just a game, where the mom looks at that game and imagines those kids who saw their friends killed and thinks, why does this game even have to exist? Are there one million other games that could entertain and challenge children that don’t involve virtual guns in their hands and killing other people, bad or not? I said to Mason, "Real empathy would be to look at that game and say, I can forgo this form of entertainment so that the one person who can’t handle it and thinks it’s real does not have access to it." He said to me, "Mom my friends want me to play GTA (Grand Theft Auto) and though I’m curious about it I told my friends no. They pushed a little more and peer pressured me, but I told them, you know what you guys, my mom doesn’t want me to play that game and I’m not gonna play." He went on to say that another kid was being peer pressured to play the game and Mason stood up for him and told the other guys if they wanted to play GTA they could go play on the other platforms, they were there playing the game they were playing so please drop the subject of GTA. To hear Mason say he wouldn’t play the game because his mom doesn’t want him to truly made me cry. It chokes me up now just writing this. I looked at him with big tears in my eyes and said, "Thank you, thank you for hearing me, thank you for respecting me, and thank you for being you." I really would like to see the day that these games are not available because I don’t think there’s anything fun or educational in them, a game should be fun and why anyone would think killing is fun, I don't know.

I am sure the day will come that Mason will not be so strong in the face of peer pressure, but I am sure glad he is right now. I'm so happy another child was witness to someone holding their ground when being pressured, and I'm elated that the other boy experienced someone standing up for him. Mason is an amazing kid and for as much as he can be a pain in my butt, and we knock heads, he is way more an impressive human being and I'm glad I get to be his mom.
Posted by Kathy at 5:00:00 AM No comments: