Home From the Licensing Show

I have so much to share, I feel as though this weeks MM needs to be in installments. As you all know, I was in Las Vegas last week attending the Licensing Expo, and boy, did I learn a lot!
I was there with a booth representing my RiverLights Originals artwork. I wanted to know, is it something that the mass markets would buy. I got my answer and as is the way it usually goes, I didn't expect it to be yes and no. Let me explain, first of all, what is licensing? Licensing is the process by which an artist or entity allows another to use their work for a fee, usually a royalty all the while maintaining ownership and all rights to the work. It's a great way to expand a brand, by collaborating with a bigger or more successful business. I'm sure you've all seen my artwork, but if you need a refresher, here's a link to the website I created before the show:
Gallery
I was given lots of positive feedback by a number of manufacturers, but the big news was that apparently I have been creating the perfect artwork for puzzles! When was the last time you did a jigsaw puzzle? I have to say, that was never on my radar. With that being said, I was approached by the countries (maybe worlds) largest puzzle manufacturer and they want to talk about using RiverLights images for a new line of inspirational puzzles. Who knew?! I was also asked to create a RiverLights gallery on Pixels.com, in addition to a few other websites that specialize in things like water bottles and home decor to name just a few. For a little immediate gratification, I was offered $500 per image for two images that interestingly are not my top images. Let's just say I'm glad I had my square when she pulled out her credit card. That one interaction alone was not only extremely validating, it paid for more than half of my cost to attend the show. Of course, I met so many other people as well. The people who had booths around mine were a wealth of information, I met a number of manufacturers from China and having had that face-to-face time was invaluable. I came home fired up to sell my work, to be able to create something once and sell it over and over. I am still a Realtor and I'm still Mason's momager and I love both of those jobs immensely, but being able to make money with my creativity and inspire others, well, that's just priceless.
Speaking of Mason...ugh! As many of you know, Mason has been auditioning quite a bit lately and a number of those auditions have been a 3rd, 4th, and 5th step in the process to being cast. He's been told that he is in the top few kids being considered and we all were feeling very positive that this was going to happen. Well, as kids do, or should I say, "don't" listen to their parents, Mason outright disobeyed me and rode his skateboard at the El Dorado County Fair (broke their rules, too as the park was closed, but not locked) and severely twisted his ankle. This set in motion a chain of events that has been bad, bad, bad! Not only is a sprained ankle bad, but this was the Friday before we were to leave for Las Vegas and he was then headed on a flight by himself to spend time with family in AZ. All the while, we are waiting on the call from the casting people to find out if he's been selected to compete and now I'm wondering if he will even be able to compete.

We saw the doctor the night he hurt himself and x-rays showed it was not broken. They soft casted his ankle, gave his some crutches and off to Vegas we went. Mason has not been able to walk at all. He's been on crutches and in a wheel chair and we have not shared this on social media as we did not want the casting people to see it and not select him because of his injury. We are seeing an orthopedist this coming Friday and we were going to determine if we needed to let them know or not. The night he injured himself he also put his iPhone in his pants pocket and the one time I did not check them, it went through the washer. So he is experiencing the effects of bad Karma and poor choices over and over again.

Last Thursday night the call came that he was not selected for the show. This may not seem like a big deal to most people, but this is a darn near copy-cat disappointment to his being selected as the alternate for Rachel VS Guy Kids Cook Off on Food Network. This show is also a FN show...he was in the top 10, the chose 8. As this has all played out, I am understanding a few things and seeing some bright sides. Mason loves to cook, but more than that, he loves to perform and entertain. The cooking has certainly been a vehicle to opening doors for him, but I'm wondering if the message here is to look for other opportunities for Mason that are not so heavily rooted in cooking. For me it was good that he was not selected, as I am busy with work and my clients don't like not having me physically available for 10-14 days at a time. Additionally, all of the excitement with RiverLights would have fallen by the wayside if we had to leave for LA on July 5th. Yeah, I was disappointed as was Mason, but I can't stay bummed for long and I really do believe that there are signs and guiding forces trying to help lead us to our best lives. I'm sure there is lots more to this story as life goes on, and in the meantime, Mason can heal and hopefully realize that when mom tells him not to take the chance of hurting himself, she is not full of #$%&.
Intentional Winning: Victory by design. Creating the journey and the outcome for every aspect of your life by participating in the process.

Out of the Office
Will return on June 27th will all kinds of wildly good news!!
Posted by Kathy at 5:00:00 AM No comments: 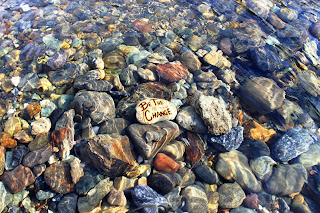 Welcome to a new week! I'm glad it's Monday because in the wee hours of Sunday morning I woke up with a terrible stomach bug. It lasted over 30 hours...I don't think I ever realized how l-o-n-g 30 hours really is! Just as I was saying a little prayer that it was finally over, Dave was getting out of bed and hurrying to the bathroom. Oh no! Yeah, Dave's been home in bed (mostly in bed, between bed and the bathroom!) while I was playing catch up after being down for the count for more than a day.
In other news, Mason is being considered for a number of projects and one in particular is suppose to make a decision this week. He is completely confident and I hope he is right. I'll share the news when I can...if it turns out I can't just yet, follow along on Mason's Facebook page and if you see us in Los Angeles for a spell, well, there's your answer!
For me, on Sunday we leave for Las Vegas where I will be showing my RiverLights art work. I'm really excited and hopeful that I can license my images of my inspirational river rocks. I'm excited, not only am I taking a chance to sell my art, but Dave and I will get some time together in Vegas and Mason will be catching a flight to visit his uncle in AZ for a few days. Even though we've flown a lot, I'm a teeny bit nervous about Mason flying by himself. I know, I know, it's so silly as he knows the ropes, he knows how to get through security and get to his gate...but he's my baby, my only baby and this world is a lot crazy these days. I'm going to trust that Dave and I are raising a confident and able young man and all will be just fine. :)
I'll share a brief update next Monday from Las Vegas but in the meantime, send lots of positive intention for success on all fronts!
Posted by Kathy at 5:00:00 AM No comments:

It's Monday again and today I am grounded. Well, not in the I got in trouble and whoever is the boss of me, ground me, but instead I'm grounded because my Toyota is in the shop and I may or may not get it back today. Other than the obvious fact that having an auto repair bill sucks, it's good to be home to take care of the stuff that always seems to get pushed to the bottom of the list. Some of those things include dealing with the ordering of postcards for the trade show later this month, scan and email an offer for some clients who finally found a house they both love AND is in their price range, sort through paperwork for Mason - recipes, skills info, and the notes to create another "learning to cook" game idea he has. Oh, and I need to write my Monday Motivator and get last weeks posted (it's been written and sitting in my drafts in my email).

It's been a busy week, Mason had an audition in San Rafael so we planned to stay for dinner. We couldn't decide what we wanted to eat so I suggested we go to Sausalito and go have an dining experience on the water. We went to The Trident and shared a couple of appetizers (mom couldn't afford the full blown dinner experience this time) and enjoyed the view of the city across the bay. We had a lovely visit, some delicious food, and then we had a burger for our real dinner. :)

I'm enjoying this journey with Mason so much, in fact, it seems he's turned a corner and is being less obstinate and more agreeable to doing his chores and what Dave and I ask him to do. At one point I asked him to take the garbage out and he just got up and did it. My mouth fell wide open and I approached him slowly, I reached out to check his forehead for fever and when he felt normal I asked him who he was and what he did with Mason. He rolled his eyes at me and said, "Whatever" and took the garbage out. I breathed a sigh of relief when he rolled his eyes and could see all was well. Have a great week and stay tuned for what I hope is more exciting news.