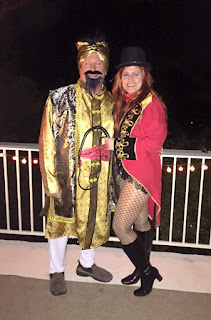 Despite our current housing issues and the struggle to buy a house, we had a blast over the weekend for halloween. As much as Dave loves Christmas, I believe he loves halloween more. This year we dressed with a circus theme, he a fortune teller, inspired by Zoltar from the movie Big and I went as the circus ring master. Mason made his costume, he did not follow the circus theme, instead he dressed as one of his video game characters. We had friends in town, Steve and Ro and we went out both Friday and Saturday nights.

Friday night we attended James and Lisa's annual halloween party and let me assure you, they leave nothing to the imagination when in comes to decorations, their house looked amazing! After their party, we popped into our local bar to do some more dancing and before we called it a night, Dave won 3rd place in the costume contest! 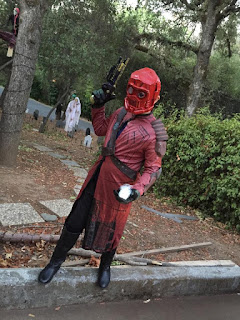 Saturday night was actually halloween and while Mason was off trick or treating with friends, Dave, Steve, Ro and I sat out on the deck and had dinner while enjoying all the halloween decorations and a roaring fire in the pit. Having rocked our Friday night costumes already, we pulled together new costumes from our massive stash (yes, it's massive!) and I wore my witchy woman costume and Dave pulled together a witch hunter get up. Steve wore our King Tut get up and Ro went as a kitty cat. Wouldn't you know it, as we were getting ready to go out, the septic system backed up and created a mess that had me on the phone trying to see how soon someone could get here to figure it out. Of course I called our landlord and of course she noted we clearly did something wrong. I'm not going to belabor that point, but suffice it to say, this put a bit of a damper on Saturday night. Here we are on Monday and the plumber said there was no clog and it must be something with the septic system - and those guys can't be here until tomorrow. My landlord has instructed us to not do laundry, no paper in the toilet, no dishwasher, and to go easy on #2. How do you "go easy"? When you gotta poo, you gotta poo! 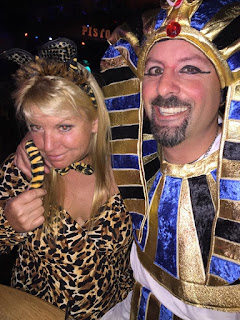 So that's it, our halloween was mostly fun, until shit happened! 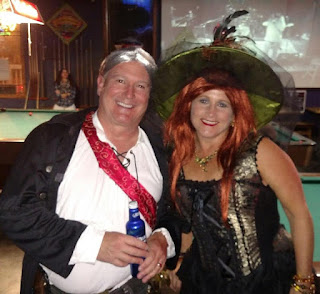